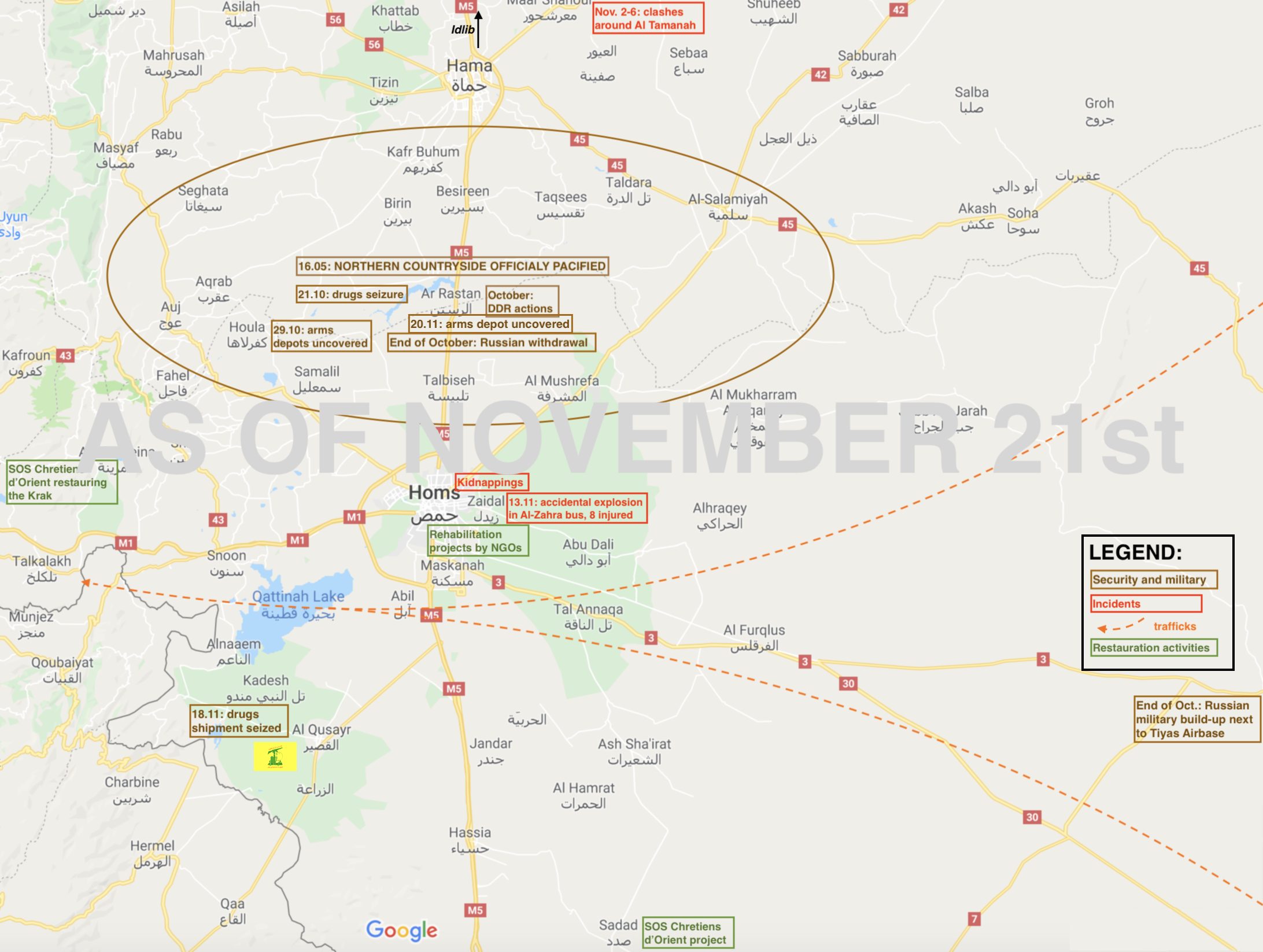 This area risk assessment was produced for a client in November 2018. It was based on both open-source intelligence (OSINT) from the Internet and social media in English, French and Arabic languages and human intelligence (HUMINT) from local sources on the ground. As part of our mission, our teams also monitored social media and news feeds in several languages while staying in touch with contacts in the field to alert our client in case of an event.

As of today, this assessment is not outdated. Homs is still a relatively quiet city in its reconstruction phase, with government operations still uncovering arms and drugs depots in the surrounding countryside, police actions to impede traffics of motorcycles and arrest small groups of robbers. The situation in Idlib remains to be monitored because of the impact an assault on Idlib could have in terms of masses of displaced people reaching Homs.

The reconstruction process is progressing, two years after the liberation of the city: rubbles and hundreds of destroyed cars are being removed, many roads are being reopened and barriers on Hidhara Street, around Zahra neighborhood and leading to the center of Homs have been lifted. There are no military checkpoints or presence inside the city anymore since end of January 2019. Parts of the population that had been fighting in government-supportive militias have stood up to the removal of checkpoints, fearing retaliation from Sunnis. The local government tries to have pictures of martyres and sectarian slogans removed and Shia-Alawi ghettos opened and normalized. Checkpoints at the city’s entrances and exits are still in place though, as of February 4, 2019. Mid-February, the third stage of the rehabilitation of Homs’ old souks has started under the Department of Antiquities.

But there is still much work to do and the lack of infrastructure and services for the population adds to the very high prices of commodities. Northern rural Homs faces winter without heating, since the price of firewood and mazout is almost twice higher than the national average and electricity cuts for 16 hours a day. Here is a list of commodities prices in Homs as of February 8. High prices and the cuts in funding from relief organizations such as the Syrian Red Crescent to some areas including al-Rastan and its surroundings may be due to “sectarian reasons”, since other regions that are more supportive of the government receive aid in relative abundance. The situation of farmers in particular is difficult, due to the troubled operations of Homs’ General Fertilizers Company and quasi-absence of fertilizers —that are 7x more expensive on the black market — and high fuel prices. The Homs Agriculture Bank claims that the value of their sales of fertilizers and seeds increased by 49% from 2017 to 2018, which could be a sign that the risk of a food crisis may decrease, but it does not indicate whether the increase in value is due to an increase in quantities sold or in prices. A Russian company has signed in November a 40 years contract to exploit the Syrian Fertilizers Company, which would allow for increased production for exports but also increase the price for local farmers.

Meanwhile on the military side, Iran may be moving its weapons supply center from Damascus Airport to T-4 military base 90km East of Homs, and Russia just positioned four S-300 air-defense systems in the Masayf area, 60km North-East of Homs.

On 16 May 2018, Syrian regime forces announced capturing the whole Northern countryside and Southern Hama after evacuating the last batch of the Syrian opposition factions towards Idlib following an agreement imposed by Russia. The General Command of the Army and Armed Forces officially announced the liberation of up to 65 cities, towns and villages in northern Homs countryside after forcing the rebel groups to accept a surrender deal.

Until the second half of October, the Syrian security forces continued to carry out mob-up operations to secure the liberated towns and villages.

End of October 2018, Russian forces withdrew from the Northern countryside of Homs and handed it over to the Syrian regime forces following a deal approved 6 months ago.

Around October 20-22, Russia sent military material including S300 surface-to-air missile systems to the military base they are building up West of Tiyas T4 airbase (90km East of Homs).

In September, the Syrian Army has uncovered huge arms depot in al-Rastan city, 22km North of Homs. End of October, it also uncovered weapons hidden by former rebel fighters in Houla region and drugs depots while securing the Northern countryside of Homs. On Nov. 20, it uncovered an arms depot in Al-Rastan again, with US-made M-16, RPGs, Dushka sniper, 130mm cannon, mortars, a metal detector and so on.

Since a reconciliation deal was put in place in rural Homs, the Syrian government has been working to settle the cases of thousands of rebels and opposition loyalists in the Al-Rastan and Al-Houla plains. Early October, the government settled the cases of 175 people in Homs after they turned themselves into the authorities.

The Homs badiyeh — desert areas Southeast of Homs — is also an area with Islamic state cells and tribal support for trafficking towards Tell Kalakh and the Lebanese border a few dozens of kilometers Southwest of Homs.

On Nov. 18, the regime seized a drugs shipment that was leaving Hezbollah’s stronghold Al-Qusayr Southwest of Homs towards Latakia.

Homs and its surroundings are not witnessing any more armed tensions nor confrontations. The area is pacified, ‘disarmament, demobilization and reintegration’ (DDR) processes are being carried out successfully. The situation is stable and Homs remains isolated by pacified Hama from developments in Idleb on the short term — and even from November 2-6 clashes around Al Tamanah, North of Hama. However a coming assault on Idlib would probably impact Homs’ stability due to the flow of displaced persons fleeing Idlib. Such hypothesis will depend on external political factors.

The most secure and peaceful neighborhoods according to sources on the ground are Al-Hamidiyye and Bustan Diwan (Old city). The areas of Al-Zahra, Al-Arman, Al-Hadar are also quiet but it is recommended to remain watchful while going there. It is also advised for foreigners not to use public transportation (buses) after 8pm.

Inhabitants of Al-Zahra are Armenians, Alawites and Shiites, many of whom are fighting in the ranks of the Syrian Army and pro-government militias. An explosion in a bus near Al-Zahra university injured 8 people on the 13th of November 2018. The Syrian state news agency first reported that an IED had been placed in the bus before deleting its article. Our sources confirmed the explosion was caused by the grenade of a soldier in the bus accidentally unpinning.

There remains a lot of checkpoints everywhere and the possibility of sudden and isolated violent actions shall not be excluded due to the presence of a high number of ex-Shabiha —Alawite groups of armed militia in support of the Ba’ath Party — that kept there firearms after returning to the civil life. Specifically, our sources on the ground evoke several mysterious disparitions of locals. Those seem to be motivated by political, military or religious affiliations and result from post-war settling of scores: thus, they shouldn’t impact NGO activities.

Anyone who settles and invests in Homs should expect to have to give alms to a war lord or other apparatchik to have peace.

Significant changes in the sectarian structure of Damascus and Homs populations show a decline in Sunni population and sharp increase of Shiite population as well as other religious minorities. The Homs Governorate has seen the percentage of its Sunni population fall from over 60% before the war to 20-25% today. This situation is not likely to change since the dominating parties

Demographic change and destruction and dispossession of properties are two major obstacles for Syrian refugees to potentially return home. Homs is only 30km away from Qusair, a Hezbollah stronghold between Hermel, Lebanon, and Homs. This also explains why the overwhelming Sunni majority will have difficulty in recovering its properties.

Another obstacle to the full development of a peaceful daily life in and around Homs is the catastrophic economic conjuncture. Apart from the evident burden of destructions, the government has decided to call on the people of northern Homs to pay their taxes accumulated since seven years. Such an intensified pressure on local living conditions may lead to social tensions or unrest.

The City Council of Homs’ Directorate of Cleanliness continues to remove the rubbles from Homs neighborhoods of Kerm al-Zaytoun, al-Awar and Baba Amro after having cleaned Qarabis, in preparation for the return of the people to it. The Direction of Public Works also has several rehabilitation projects. The reconstruction plan in Homs focuses on three of the city’s most destroyed districts — Baba Amr, Sultanieh and Jobar, according to Homs’ governor. On the longer term, the …